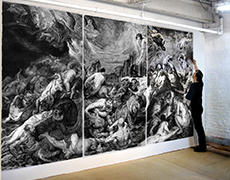 FAIRFIELD, Conn. (June 22, 2016) — The rebranded Fairfield University Art Museum —formerly the Bellarmine Museum of Art —presents “Rick Shaefer: The Refugee Trilogy,” a monumental new series created by the artist in response to the ongoing refugee crisis convulsing the globe, on view from Thursday, September 8, through Saturday, October 22, 2016 in the museum’s Walsh Gallery. An opening reception, free and open to the public, will take place in the Quick Center for the Arts on Wednesday, September 7, from 6:00 – 7:30 p.m.

This three-piece suite is comprised of Land Crossing, dealing with the migration across foreign lands; Water Crossing, addressing the perilous journeys of refugees on the open seas; and Border Crossing, spotlighting the conflicts and hostilities faced at borders. The trilogy employs the artistic lexicon of the Baroque (specifically incorporating heroic figurative elements of paintings by Peter Paul Rubens) to explore this contemporary crisis in a language both familiar and canonical. Such historical quotations underscore the tenacious persistence of this epic human tragedy throughout time.

In addition to the three triptychs, each executed in charcoal on vellum, the exhibition will include a more than a dozen of Shaefer’s preparatory drawings for the series. These show the artist focusing his attention on many individual details such as a lion’s head, a horse’s head and rump, and close-ups of the faces of refugees in the center panel of Land Crossing.

The audio tour for this exhibition will include the voices of resettled refugee and immigrant youth, students, and teachers of the Connecticut Writing Project at Fairfield University who have written and recorded stories of migration and movement, and their thoughts on the current crisis, to share with the audience of the Refugee Trilogy.

Extensive programming has been planned around the exhibition of these powerful and timely works. Prior to the opening reception on September 7th, Stijn Alsteens, Curator of Prints and Drawings at the Metropolitan Museum of Art, will give a lecture on Rubens and the Art of Inspiration at 5:00 p.m. in the Wien Experimental Theatre. On September 14th at 5 p.m. there will be an Artists’ Talk with Rick Shaefer and innovative South African playwright Brett Bailey, whose new work in progress, “The Raft,” is also a response to the current refugee crisis and, like Shaefer’s pictorial series, finds inspiration in Gericault’s haunting Raft of the Medusa. Bailey and his company Third World Bun Fight will be in residence at the Quick Center for the Arts at this time to open the U.S. premiere of Verdi’s Macbeth on September 17th and 18th. On September 20th at 5 p.m. The Syrian Refugee Crisis: Over Land and Sea, a panel discussion, with Dr. Silvia Marsans-Sakly (Asst. Prof. of History, Islamic World), Julie Whittaker ’12 (Amal Foundation), Wendy Christian (Save the Children USA) and artist Rick Shaefer will be held in the Walsh Art Gallery. An Islamic Calligraphy Workshop with American Islamic calligrapher and artist Faraz Khan, the 2015 artist-in-residence at the Arts Council of Princeton University, will be held in the Walsh Art Gallery on September 23rd at 6:30 p.m. There will be a screening of the film Salam Neighbor followed by a Skype conversation with the director Chris Temple on September 26 at 7 p.m. This important documentary gives an intimate look inside the Za’atari refugee camp in Jordan where 85,000 Syrians struggle to restart their lives. Finally, Dr. Lisa Brody (Yale University) will give a lecture on Dura-Europos: Exploring and Preserving Cultural Heritage in Roman Syria in the Multi-Media room of the DiMenna-Nysellius Library on October 18th at 5 p.m. All events are free and open to the public but pre-registration is requested.www.fuam.eventbrite.com.

Venü is the exhibition media sponsor.

The Walsh Gallery of the Fairfield University Art Museum, is located in the Quick Center for the Arts on the campus of Fairfield University at 200 Barlow Road, Fairfield, Conn. It is free and open to the public Monday to Friday, 11 a.m. to 4 p.m., when classes are in session. Please consult the museum website for details (fairfield.edu/museum).

Fairfield University is a Jesuit University, rooted in one of the world’s oldest intellectual and spiritual traditions. More than 5,000 undergraduate and graduate students from 36 states, 47 foreign countries, the District of Columbia and Puerto Rico are enrolled in the University’s five schools. In the spirit of rigorous and sympathetic inquiry into all dimensions of human experience, Fairfield welcomes students from diverse backgrounds to share ideas and engage in open conversations. The University is located in the heart of a region where the future takes shape, on a stunning campus on the Connecticut coast just an hour from New York City.